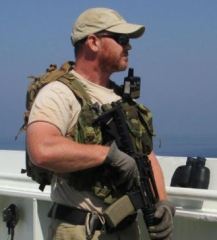 Before I delve into my post I want to give some of  my own background. I started my professional career in the US Marine Security Forces providing armed physical security for a critical national asset.  I have provided Force Protection in a combat zone, was a Marine Scout/Sniper, and I have provided unarmed security in a level 3 psychiatric ward. I have conducted anti-piracy operations in and around the Gulf of Aden and finally, I have been an information security professional for nearly 20 years.  I am also working in a Doctorate in CyberSecurity.  I have written scores of articles and spoken at many dozens of security events.  I may not know much in life but I understand security.

I read a letter from a mother of a Sandy Hook victim.  In the letter she said:

“I am sorry that our tragedy here in Sandy Hook wasn’t enough to save your loved ones,”

While I feel for the mother and understand her very normal and appropriate response to losing her child, the argument simplifies the issue.  Unfortunately, what we are dealing with is not a gun issue…it is a people issue.

Security is a science that is ultimately focused upon identifying and modifying human behavior.  Like all sciences there are concepts that are critical to understand.  Rational Actor Model, Deterrence Theory, Escalation of Force Cycle, Proximate Reality, Defense Cycle, Causality, and Risk, are but a few of the concepts that underpin all security (cyber, operational, physical etc.)  One that is critical for those who work in security to understand is that of Threat Adaptation.

According to the Department of Homeland Security’s Security Lexicon, Adaptive Threats are defined as:

“…threats intentionally caused by humans.” It further states that Adaptive Threats are: “…caused by people that can change their behavior or characteristics in reaction to prevention, protection, response, and recovery measures taken.”

The concept of threat adaptation is directly linked to the Defense Cycle.  In short, as defenses improve, threat actors change their tactics, and techniques to adapt to the changing controls.  As the threat actor improves their capabilities the defensive actors necessarily have to change their own protections.  This cycle continues ad infinitum until there is a disruption.

Consider castles.  Originally, they were built of wood.  Those assaulting castles then began burning them down.  Castle makers then built Castles of stone.  Assaulters then created siege engines to knock down the walls.  Castle walls were made larger and stronger and were nearly impenetrable until cannons were introduced.  Even in situations where the attackers could not ‘storm the castle’ they would simply lay siege and starve the inhabitants until they either died or capitulated.  This is a classic example of threat adaptation and the defense cycle.

Today we are dealing with a motivated, determined enemy who is focused on doing the most damage possible. When dealing with adversaries driven by financial motives, the calculus of deterrence is straightforward.  Simply increase the cost of achieving the objective beyond the payoff.  This is classic Rational Actor Model.  When dealing with an adversary driven by ideology are much, much more difficult to deter.  People that are willing to strap bombs to their bodies in an attempt to make a political or social statement are difficult (if not impossible) to deter.

So how does this apply to Gun Control?  Glad you asked.  As an example, let us use the Orlando night club shooting. The killer in Orlando was focused on doing the most damage possible and had already conducted reconnaissance.  He was motivated, intelligent and focused.  He was also looking for the ‘softest target’.  Notice he did not choose to assault a Hells Angel’s clubhouse!  Think about it..why?  Quite simply, he would have had a real fight on his hands and likely would have gone to Allah in short order.   Simply by being who they are..the Hells Angels deter certain behavior. (you can read about deterrence theory here) By choosing a ‘soft’ target he was already adapting his tactics to perceived controls (ie.  Hells Angels are damn tough, willing to fight, and have guns).  Even if the killer had not been able to purchase a firearm legally, he would have simply adapted his tactics to achieve his goals.  He could and likely would have purchased a stolen firearm or would have manufactured a bomb.

In 1964 a man by the name of Walter Siefert killed 2 teachers and 8 students while wounding 22 more with a lance and homemade flame thrower.  In 2014 10 men armed only with knives stormed a train station in China and killed 29 while wounding 130. In 1927 in Michigan Andrew Kehoe killed 38 school children and wounded 58 others with a homemade bomb.  In 1927 there were no ‘assault weapons’ and yet he was still able to kill 38 students.  At the risk of sounding flip the old adage “Where there is a will there is a way” holds just as true with those intent on murder as those intent on going to college.

While it is difficult to accept, gun control will NOT prevent what we saw in California and Orlando in the past few months.  These are motivated, intelligent adversaries who are focused on doing damage and will find a way.  Only through better intelligence, counter terrorism, and policing will we be able to reduce (not prevent) another instance of Orlando.

“I left the sky in the middle of the night
I hit the deck and I’m ready to fight.
Colt .45 and Kabar by my side
These are the tools that make men die.”

This post is not a position on gun control rather it is intended give some insight into a side of the issue few outside of specialized jobs probably recognize or acknowledge.  That of the human weapon.

There is an expression every Marine learns in Basic Training.  “The most dangerous weapon in the world is a Marine and his rifle.”  Without justifying the statement (we Marines are very good at self-promotion), the statement is insightful and applies equally to the Rangers, Airborne, SEALS, RM Commandos or any other combat troop.  The truth is that it is the combination of the Marine and his rifle that make a weapon.  The ‘weapon’, whether it is an M4, SAW, LAW or even the Marine’s legendary Ka Bar fighting knife is nothing more than a tool that, when applied by a skilled individual allows a person to achieve an objective.

Is a gun a weapon?  It certainly can be.  Can it kill without being a weapon? Certainly.  Consider a firearm used for hunting that explodes and hurts the user.  This is a safety issue in which a tool failed.  Can an insect sprayer be a weapon?  In the wrong hands, it has been used to kill many people.   On June 11, 1964 a person walked into a school in Cologne, Germany with a bug sprayer filled with gasoline.  Armed with his “flamethrower”, a mace, and a lance, he killed 9 students, then himself.  Alone, a bug sprayer is an innocuous and helpful tool.  In the hands of someone intent on killing, it becomes a deadly weapon.  This post is talking about the person that makes the gun, bug sprayer, sword, or bomb…a weapon. END_OF_DOCUMENT_TOKEN_TO_BE_REPLACED

Thank you for visiting this blog!  “Young People Will Win” is a phrase that has been bandied about by a survivor of the horrific shooting at Marjorie Stoneman Douglas high school.  While a very tragic event, it has fostered a movement in which the promoters are using “gun control” as a pretext to further a liberal agenda and support Democrats in office. This blog is intended to educate people on the 2nd Amendment, firearms, violence, and security theory.

Some comment by one of the ‘leaders’ and founder of the movement, David Hogg, include:

“Like when your old ass parents say, like, “I don’t know how to send an iMessage and you are just like “give me the fucking phone and you are like…ok, let me handle it and you get it done in 1 second”

“Sadly, that is what we have to do with our government because our parents don’t know how to use a fucking democracy.”

It may surprise the 18 year old Mr. Hogg that some “old ass parents” do, in fact, know how to use both technology and a democracy. Listen to his comments and decide if this is the voice of reason on the gun control debate.

Adding to this is another “founder” of March4our lives:  Cameron Kasky, who, when questioned about his bona fides stated,

No offense, but being shot at does not make one an expert on security or shootings. This blog is intended to talk about the topics at hand…we will try to do that objectively, and professionally.